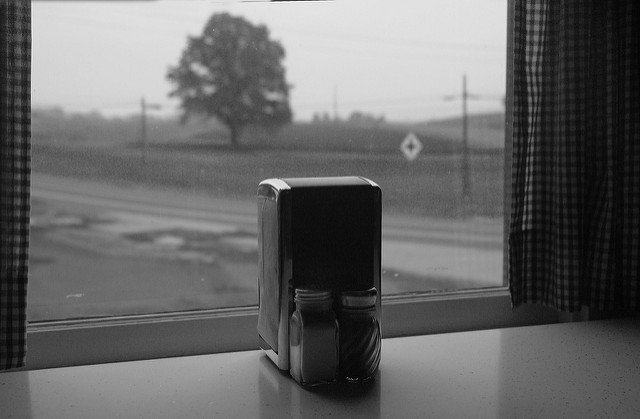 I mean this in the nicest way possible (which quite possibly is impossible!), “Some people are irresponsibly, abrasively, irritatingly, annoying!”  There, I said it.  As we were out and about late one afternoon this past week, we decided to stop at a “Local” place and have dinner.  We had been running since early morning and neither of us were interested in cooking.  We were looking for a nice, quiet, peaceful dinner.

Once inside the newly refurbished and decorated dining establishment, I found that, for once, my mom did not know twenty-five people in the room; although she did stop and talk to one of her old bank customers.  Business was light and I snagged a table over on the side of the room that is lined with windows.  Our server came over and sat down and chatted with us for a bit before taking our order, as is the way in small town diners.  We had gotten our drinks and were sitting there discussing the possibility that it may actually be cheaper to eat out than to buy groceries and cook.

The next thing I know, I looked out the window and coming straight toward the spot where I was sitting, in high-speed mode, was a large, white SUV.  The very second I was ready to jump over the table and push my mom out of the way, the SUV turned just enough to slide right by the side of the building, clearing it by about a foot or so, and squeezing into a parking area too small for that much vehicle (and definitely that much speed!)

I looked at my mom and said, “I thought she was coming to take me to Jesus!”  She had not seen the “coming to take me to Jesus” part, just the “sliding by the building” part, of which she was surprised the the side of the building was still standing.  The parking spot they ended up occupying was behind me.  I turned around to see if I recognized the vehicle.  I did not.  Mom said that she did not know who it was either.  We both agreed that they had been driving way too fast to try and swing that big SUV into that particular parking spot.

It was not that the parking spot itself was too small, it was the “getting to the parking spot” that caused the anxiety.  There are two parking spots right outside that wall of windows, one on each side of the building. Right between and beside these two parking spots is a heavy metal pole that holds up the restaurant’s sign.  There barely seems to be enough room for a standard size vehicle to squeeze through from one side to the other, let alone a full size SUV that has just put down landing gear and skidded to a stop on the runway!  So, again, I will just say that they were definitely driving too fast to hook that vehicle into that particular parking spot at the speed they were doing, when they should have pulled into it from the other side of the building in the first place.

I was still a bit irritated when the driver, a female, that seemed to be alone, obnoxiously slammed into the back door and walked across the room as if she owned it.  She was looking to be seated.  They must have told her that she could sit where ever she wanted.  Then, with many booths and tables available on this very light-customer evening, where does she choose to sit?  Yep, right behind me.  I just looked at my mom and rolled my eyes.  Happens all the time… tables in restaurants, parking places, park benches!  We obviously have magnetic qualities.

Our server brought our dinner and we began to eat, only to find that, coincidentally, with the appearance of this person, there happened to appear a fly.  (So, as petty as it sounds, I am convinced that she let the fly in the back door.)  This was an annoying fly that did not seem to be bothering anyone but us.   So dinner became a game of “bat the fly away from the food.”  Yes, I was trying very hard to bat it backwards!!

To make matters worse, she puts her phone down on the table and dials up someone, via speaker-phone.  We then got to hear both sides of this conversation.  It was within this conversation that I figured out that, “she’s not from around here.”   So now I’m sitting there, even more annoyed, thinking, “Yea, these people come into our little lake community with their rude, obnoxious manners, and act like they own the town.”  It can be quite trying to live in an up and coming tourist destination.  Oh yea, I left the restaurant pretty nicked.

I confess, I was tired, and probably being a bit overly grumpy and not very hospitable to a stranger.  And believe me, she was being extremely annoying; but….   Yes, there is a “but” to this situation.  I am certain that I could have handled the whole thing a little better.  Under normal circumstances, (where I had not just seen the pearly gates flash before my eyes, and had not done hand-to-wing combat with a ninja fly, and had not acted as the third party in an open-mike phone call….),  most times, if we had taken the time to note that the someone was from out of town, we would generally have spoken kindly to them in a welcoming manner and asked where they were from and how they came to be in our little town.

Oh yea, I call that an epic fail on my part.  Where were all those things I say I believe in, the attitudes I desire to maintain? “…love, joy, peace, patience, kindness, goodness, faithfulness, gentleness, self-control…”  (Gal 5:22-23 ESV)  I am thinking they were just out of reach from me on that day.  I allowed my annoyance over her irresponsible and annoying behavior to overshadow my normal, easy-going manner.

God sends us “divine appointments” each and every day, if we will only acknowledge them.  Every interaction that we have is an opportunity to show others the love of Jesus and to help others come to know His saving grace.  Do we always make the best of those appointments? Obviously not!  Sometimes we keep our back turned and do not acknowledge the opportunity before us.  We fail our God and we fail ourselves.  Color me guilty.

The thing is, if we are blessed, we get another day to make another attempt to say and do the right thing.  That is all we can do, take one day at at time and try to make each individual day the best it can be; when we mess up, try to do better the next time, and deliberately keep our eyes (and our dispositions) open to the possibilities that God places before us.

“Let brotherly love continue. Be not forgetful to entertain strangers: for thereby some have entertained angels unawares.” ~~ (Hebrews 13:1-2 KJV)

1 thought on “Don’t Close Your Eyes”